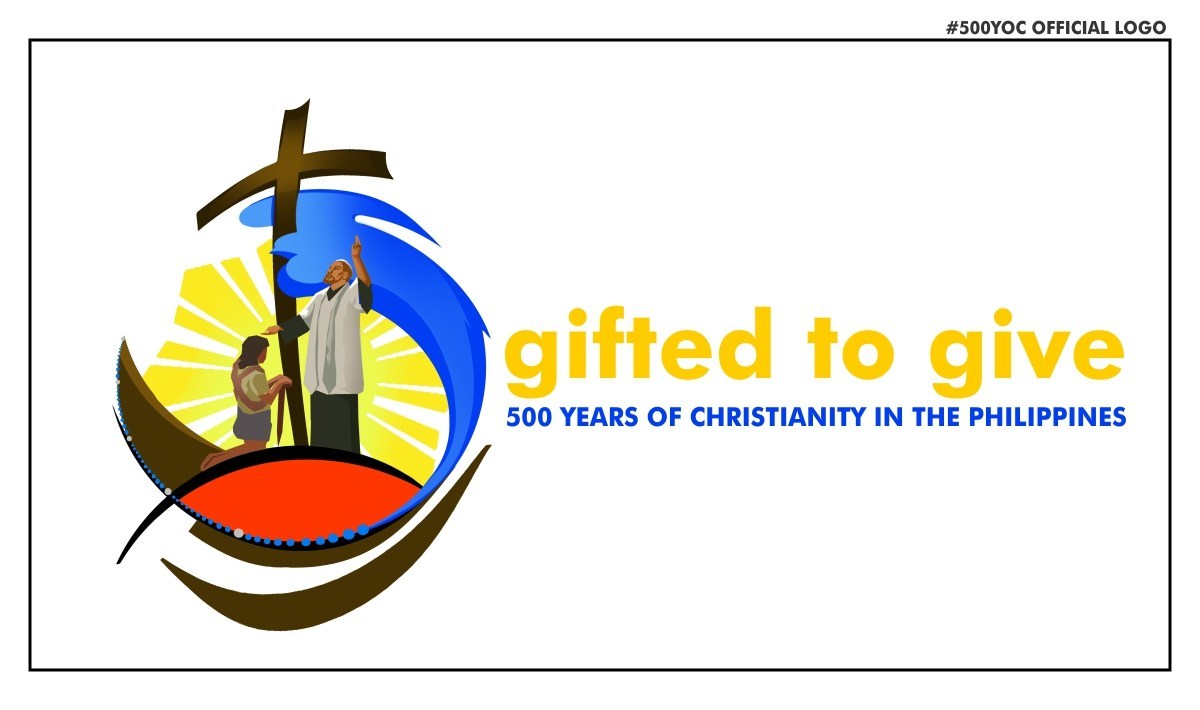 The Catholic Church has released the official theme and logo for the fifth centenary of Christianity in the Philippines.

“Gifted to Give” is the theme, taken from Matthew 10:8, for the celebration of the 500th anniversary of the arrival of Christianity in the Philippines, also dubbed as “500YOC”.

The motto and logo were officially approved by the bishops’ permanent council at a regular meeting in Manila on Sept. 18.

The logo’s central figure was conceptualized with the painting of national artist Fernando Amorsolo titled “The first baptism in the Philippines” in mind.

It also displays a cross, a ship, a hovering color of blue, the sun, the “Ichthus”, and a holy rosary.

The hovering color blue, meanwhile, shows various symbolisms. Most notable among them is its depiction of the Holy Spirit in the form of a dove.

The background is the “Philippine Sun”, a trademark of Amoroso’s various artwork. “More considerably, the sun signifies the new life, new beginning, the Risen Christ, the hope of our salvation,” the bishops said.

Underneath the other elements is the fish which symbolizes Jesus, as the early Christians would use it to indicate or introduce their selves to fellow Christians. It is colored in red to signify that the blood of the martyrs “had been the seed of our Christian faith in imitation of Christ”.

“This “Ichthus” is a sign of looking back of the history as the foundation of our Christian faith,” the added.

The blue beads also depict the holy rosary “as we Filipinos are deeply devoted to our Blessed Mother”.

It is notable that the entire color scheme resembles the Philippine flag “for the Christian faith is never a threat to our Filipino culture nor alienated its richness, because indeed Christian values go beyond and cross over any sort of cultural diversities”.

In all of these, the images are placed on a “subtle and gentle hand of God the Father” in a bold accented brown lines, “from whose uncreated wisdom has planned that all these events will be unfolded according to his will, giving us the whole picture of what we are to celebrate now, the 500 years of our Christianity.”