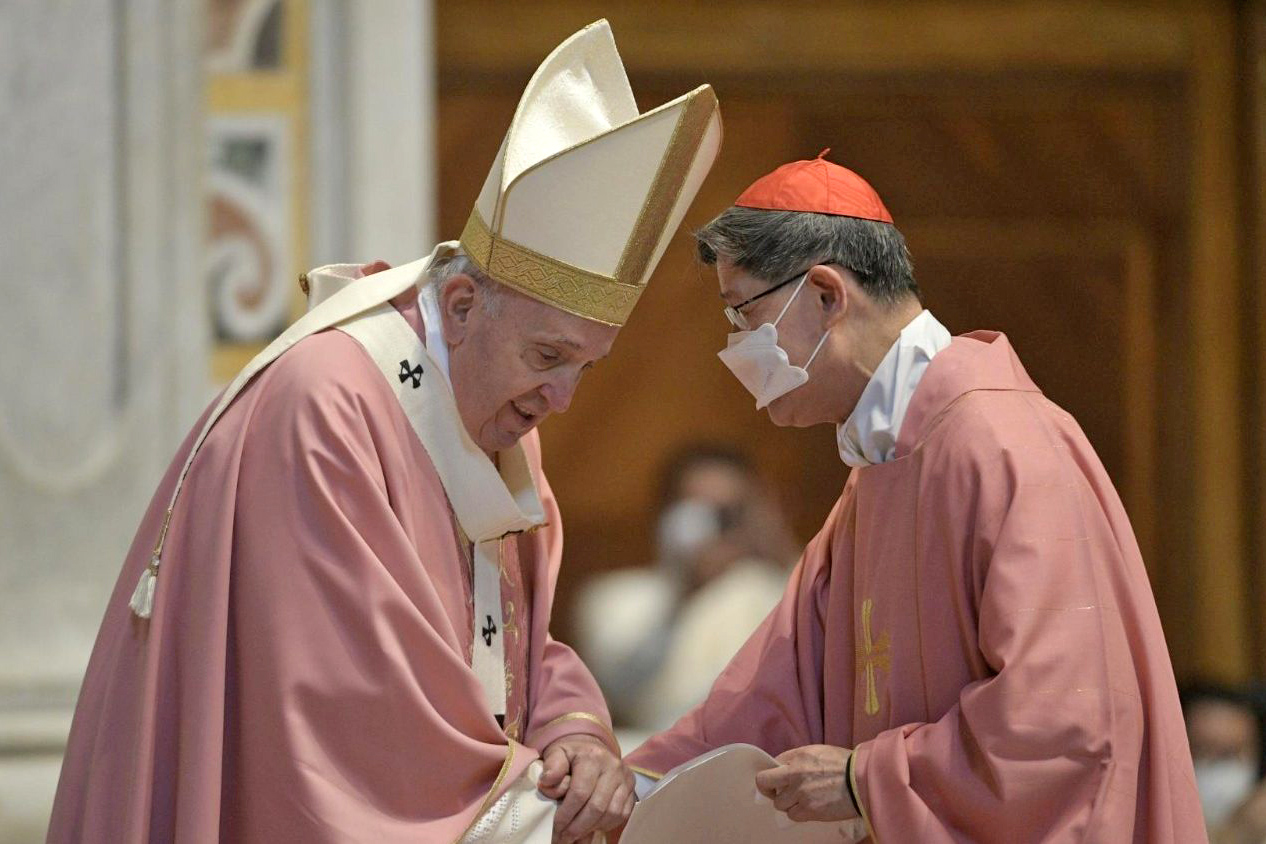 Cardinal Luis Antonio Tagle, Prefect of the Congregation for the Evangelization of Peoples, thanks Pope Francis at the end of Mass in St. Peter’s Basilica for the 500 Years of Christianity in the Philippines on March 14, 2021. VATICAN MEDIA

VATICAN— Here is the full text of Cardinal Luis Antonio Tagle’s message to Pope Francis at the end of Mass in St. Peter’s Basilica for the 500 Years of Christianity in the Philippines:

The Filipino migrants in Rome want to express our gratitude to you for leading us in this Eucharistic celebration in thanksgiving for the arrival of the Christian faith in the Philippines five hundred years ago. We bring you the filial love of Filipinos in the 7641 islands of our country. There are more than ten million Filipino migrants living in almost one hundred countries in the world. They are united with us this morning. We treasure your concern for us and for all migrants in Rome, consistently manifested by Your Vicar for the Diocese of Rome, His Eminence Cardinal Angelo de Donatis and the Director of the Diocesan Office Migrantes, Monsignor Pierpaolo Felicolo, and the Chaplain of the Centro Filippino, Fr. Ricky Gente.1

From 1521 to 2021, we see gift upon gift. We thank God for the bearers of the gift these 500 years: the pioneering missionaries, the religious congregations, the clergy, the grandmothers and grandfathers, the mothers and fathers, the teachers, the catechists, the parishes, the schools, the hospitals, the orphanages, the farmers, the laborers, the artists, and the poor whose wealth is Jesus. By God’s grace, the Filipino Christians have continued to receive the faith, one of the sources of hope in facing poverty, economic inequality, political upheavals, typhoons, volcanic eruptions, earthquakes, and even the current pandemic. As we confess our failure in living the faith in a consistent manner, we also recognize the great contribution of the Christian faith in shaping the Filipino culture and the Filipino nation.

The gift must continue being a gift. It must be shared. If it is kept for oneself, it ceases to be a gift. By God’s mysterious design, the gift of faith we have received is now being shared by the millions of Christian Filipino migrants in different parts of the world. We have left our families, not to abandon them, but to care for them and their future. For love of them, we endure the sorrow of separation. When lonely moments come, Filipino migrants find strength in Jesus who journeys with us, the Jesus who became a Child (Santo Nino) and known as the Nazarene (Jesus Nazareno), bore the Cross for us. We are assured of the embrace of our Mother Mary and the protection of the saints. When we miss our families, we turn to the parish, our second home. When there is no one to talk with, we pour our hearts to Jesus in the Blessed Sacrament and ponder His word. We take care of the children under our charge as our own children, and the elderly as our own parents. We sing, we smile, we laugh, we cry, and we eat. We pray that through our Filipino migrants, the name of Jesus, the beauty of the Church, and the justice, mercy and joy of God may reach the ends of the earth. Here in Rome, when we miss our grandfathers, we know we have a Lolo Kiko. Thank you very much, Holy Father.